Notes from the London Bike Summit 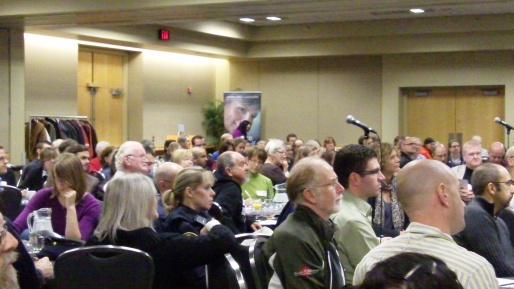 In 2006, OPP Sgt. Greg Stobbart was struck and killed by a truck while cycling on Tremaine Road, just south of Main. The truck driver had had his license suspended five times before the accident, owed $14,000 in driving-related fines, and yet he was only sentenced to 100 hours of community service and told to attend drivers ed.

That tragic experience led Stobbart’s widow, Eleanor McMahon, to begin a crusade for bike safety that resulted in the formation of the Share the Road Cycling Coalition. The group brings together cyclists, police, and policy makers from all levels of government, all dedicated to “enhancing access for bicyclists on roads and trails and educating citizens on the value and importance of safe bicycling for healthy lifestyles and communities.”

In 2009, Share the Road sponsored the first Ontario Bike Summit. This year, the summit was held in London, Ontario, a community which was recently awarded a Bronze designation in the Bicycle Friendly Community Program. This program – which Milton would do well to implement – assesses the progress made by communities in the 5 “E’s”: Enforcement, Encouragement, Evaluation, Engineering, and Education.

The keynote speaker was Amy Ryberg Doyle, city councillor in Greenville, South Carolina. She outlined many of the specific measures that have been taken by Greenville over the past 30 years to make it not only bike-friendly but people friendly through its ‘Complete Streets’ planning policies. These policies have been successful because they are not merely suggestions – they are legislated requirements which mandate the city to consider bike lanes every time a road is repaved, and all businesses to install bike racks. They also closely monitor bicycle use and changing traffic patterns in order to measure their progress. Throughout her presentation, Ryberg Doyle’s mantra was, “If you want bikes to count, count bikes!” 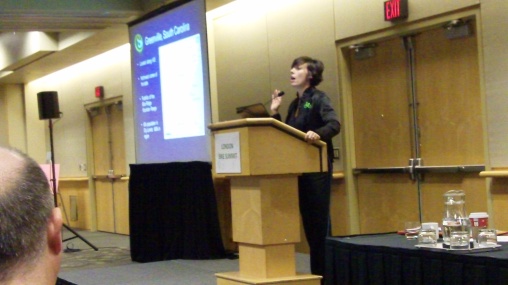 The first panel discussed the potentials of bicycle tourism in Ontario, and highlighted the economic benefits of cyclists as visitors who tend stay longer and spend more than other types of tourists. Quebec was held up as a model of a province-wide promotion and infrastructure commitment (through initiatives like Velo Quebec) that has paid off to the tune of $166 million from cycling tourists. They also discussed the Welcome Cyclists program, which allows businesses to promote themselves to cyclists by providing amenities like covered bike racks, enclosed bike lock-ups, bike repair kits, healthy food options, and local bike route maps.

The second panel discussed the specifics of building bicycle-friendly communities, and included Deputy Chief Bob Percy of the Halton Regional Police Service. Percy spoke at length about Halton’s ‘Share the Road’ program, and highlighted the police service’s role in educating cyclists and motorists in partnership with local cycling organizations. He was followed by representatives from Waterloo and Ottawa talking about their respective cities’ policies, and how they plan to go from Silver to Gold Bicycle-Friendly Communities. 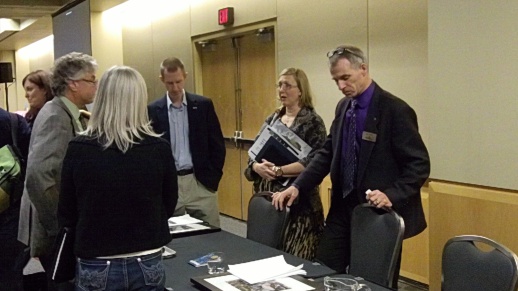 I came away from the conference with a renewed optimism that we really can make Milton more bike-friendly, and a host of practical ideas for making it happen. One of the best of these was the Road Diet.

It sounds like a radical notion: instead of adding lanes to improve traffic, take a lane or two away and give the space over to bike lanes, pedestrian islands, turn lanes, and/or sidewalks. And yet, it’s an idea that has been proven to work – in Greenville, in Waterloo, and in dozens of other communities. Here in Milton, this is essentially what was done to Bronte Street.

Diane Freeman, a city councillor from Waterloo, showed exactly how a road diet was successfully applied to Davenport Road, transforming it from a dangerous, deteriorating four-lane thoroughfare that split the community into a quieter, safer two-lane neighbourhood road with bike lanes, pedestrian safe medians and even ‘bike boxes’ – all without increasing congestion. They even had a street party to celebrate Davenport’s re-opening – and a thousand people came!

So, which Milton streets do you think would benefit from something like this?