Milton Cycle Network in the News!

Posted by miltoncancon ⋅ October 27, 2011 ⋅ Leave a comment
Filed Under  velodrome

Great article in the Champion today, with an interview with Milton Cycle Network founder Bogdan Kowalczyk (much better than the awful “bad hair day” clip of me in that piece on CHCH last week, I think).

So, what do YOU think about this velodrome idea? Great for promoting cycling, or money better spent elsewhere? 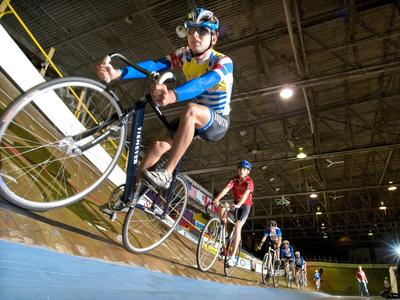 Cycling push needed. Milton council is pushing for a velodrome, like the one here in London. File photo / Metroland Media Group

Milton’s abundance of escarpment trails make it an oasis for mountain bikers, and road cyclists certainly make use of the town’s quiet rural roads.

With council now contemplating bringing the Pan Am velodrome to town, Milton can potentially attract even more area–cyclists.

But is enough being done in town to make cycling a viable alternative to cars?

One local cycling enthusiast says no.

“Milton is the only municipality in Halton without a master cycling plan,” said Bogdan Kowalczyk, founder of the Milton Cycling Network. “Where does the passion for a velodrome come from?”

Kowalczyk submitted a cycling strategy essay to the Town this spring, which he said garnered no response. He suggests building segregated cycling lanes along major roads and creating a “bike train” with GO Transit to bring cyclists from surrounding cities and towns to bike along the escarpment are two ways the Town can encourage active transportation and “cyclo-tourism”.

“The velodrome is not going to serve the community the same way as a well-designed network of cycling pathways and segregated cycling tracks would. Cyclo-tourism is a unique opportunity that we can take advantage of,” he said, pointing to Quebec’s Route Verte — a 5,300-kilometre cycling network. “If council has money, the money can and should be used to actively promote cycling within and outside of town, for the benefit of all Miltonians and all visitors that already love to cycle in the region.”